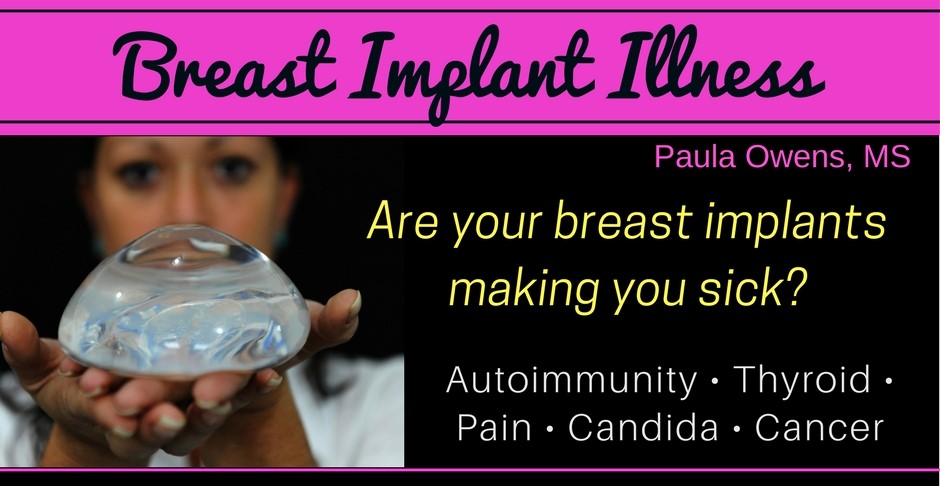 Breast Implant Illness is the name given to various symptoms and illnesses reported by women who have experienced adverse health conditions and chronic problems with their health after implantation.

There has been a great deal of controversy and unanswered questions regarding breast implant illness and the safety of breast implants especially after the FDAs confirmation of the risk of breast implant associated large cell lymphoma, a rare version of non-Hodgkins lymph cancer.

Researchers have found that women with silicone gel-filled breast implants that had ruptured were significantly more likely to have fibromyalgia, polymyositis, Hashimoto’s thyroiditis, pulmonary fibrosis, eosinophilic fasciitis, and polymyalgia.

Many patients also had symptoms of biotoxicity from mycotoxin illness, mold, fungal and yeast overgrowth due to an immune deficiency, which is common in any patient with leaking or ruptured silicone implants.

Infection appears to be a huge problem with the saline implant population that becomes ill. The infection can be around the implant, which is often exacerbated by the patient’s breastfeeding with the implant in the submammary position or it can be within the implant where bacteria or fungi are found in the implant with a valve leak.

Women who became ill from mold in or around their smooth saline breast implants experience what is called biotoxicity, a condition resulting from mold growing inside or around leaking saline implants. Dr. Ritchie Shoemaker, author of Mold Warriors suggests that this condition is equivalent to having sick building syndrome inside of one’s body.

Are Your Breast Implants Making You Sick?

The potential dangers and symptoms associated with breast implants

— Calcified tissue (calfcifications) around the implant, which may sometimes be mistaken for nodules in the breast during a mammography.

— Unexplained hives, itching, sores and rashes (a very common symptom among implant sufferers). Skin rash is listed by the FDA as a potential adverse reaction from breast implants.

— Bio-toxin illness and biofilm disease. Bio-toxins from mold poisons (mycotoxins) in and around the breast implants are neurotoxins that can cause numbness, weakness, blurred vision, headaches, dizziness, cardiac arrhythmias, pain, muscle twitching, and seizures if the implant is infected.

— Hormonal problems. Silicone is estrogenic in nature. Endocrine symptoms occur because of silicone, chemical or bio-toxin activity that acts as an endocrine disruptor. Women with ruptured and/or leaking silicone gel implants can experience increased problems with fibrocystic disease, ovarian cysts and uterine fibroids.

— Potential transfer of silicone, platinum and other toxic implant ingredients to breastfed offspring

— Some women may experience delayed wound healing, or pain in the breast, and in rare cases, infections, and even toxic shock syndrome may develop as a result of breast implant surgery.

— Impaired detoxification as the liver and kidneys struggle to remove chemicals and biotoxins, eventually causing a chronic inflammatory response that affects the endocrine, digestive, neurological, immune and metabolic systems

In 2005, I had breast augmentation surgery with silicone implants. Little did I know that the breast implants would literally nearly kill me. I was told I was depressed. I was tested for MS and Lyme disease. My plastic surgeon told me to find another reason for my illness because my implants were not the reason, even though they were so severely ruptured you couldn’t tell they were implants anymore. I had too much natural breast tissue to see an issue.

I had to see a different plastic surgeon to have them removed. My implants were probably ruptured for at least three years, but I experienced symptoms for at least six of the nine years that I had the implants. I had excessive weight gain (regardless of healthy eating plan), severe pain, heavy metal toxicity, cooked adrenals, severe thyroid problems and other hormone problems, sores, rashes, hair loss, and an anaphylactic episode requiring an ER visit, Epi and steroids. The list goes on and on.

After having the implants for 9 years, I explanted in April 2014. I am just now starting to feel better (April 2017). I couldn’t be happier that I had them removed. After I explanted, I did a provocation allergy test to silicone and my throat closed, my heart rate shot up to 180, and my blood pressure went to 210/100 (normal for me is 110/60).

Please do not overlook the possibility that your implants could be the root of the overwhelming, misdiagnosed symptoms that you’re having. I’m glad I listened to my instincts and took control of my health, and didn’t just listen to what I was told by the doctors. —Denise (client testimonial)

In September 2018, researchers at the MD Anderson Cancer Center in Houston reported the results of the largest-ever long-term safety study of breast implants. The study found associations between silicone implants and three autoimmune diseases, and that women with silicone implants were:

Compared to women with saline implants, women with silicone implants were almost twice as likely to experience capsular contracture (scarring around the implant).

In the same month, an Israeli study of tens of thousands of women also discovered a link between breast implants and autoimmune diseases. Several smaller studies conducted in recent years in the Netherlands and the U.S., reached similar conclusions.

When saline or silicone implants begin to leak, the first symptom is immune dysfunction. Most women develop symptoms of systemic Candida overgrowth including muscle aches, fatigue, hives and brain fog. Implant patients also tend to have a variety of viral infections including Epstein-Barr and herpes.

When capsular cultures are performed, approximately half of the explants have infections such as Staphylococcus, Pseudomonas, Enterococcus, and a multitude of other organisms including different types of fungi inside the implants seen on microscopy including aspergillus.

Breast Implants and Genetics. If you have an HLA-B27 or HLA DR53 or 54 gene, it is suggested to avoid all silicone and saline breast implants as the probability of becoming ill with autoimmune disease shortly after implantation greatly increases. Symptoms include chronic fatigue, joint aches, nodules, rashes, increased thyroid antibodies, and an elevated ANA.

Those with an MTHFR defect (involving defects in methylation and detoxification) should avoid silicone gel or textured implants as you will not be able to detox the chemicals and silicone that come through or off the implant shell. These patients usually become ill within a few years of implantation, or after the shell undergoes a lipolysis reaction in the body at about 8-10 years and the silicone starts to leak out.

Biofilms and biotoxins. Fungus growing in the implants produces a biofilm also known as mycotoxins or biotoxins (which is also a neurotoxin) that affects about 25% of the population due to a susceptible genetic (HLA) type.

The symptoms of fibromyalgia related to breast implant illness may be the result of chemical toxicity from the silicone gel or the textured silicone elastomer (the container that holds the saline) or bio-toxicity from mold.

If you have problems with biotoxin detox with mold exposure and mold sensitivity, you should avoid saline implants as mold in or around this implant is very common. If you have a history of fibromyalgia, intracellular infections such as mycoplasma, Lyme disease, or have a family history of autoimmune disease, breast implants may pose greater health challenges and disease.

Breast augmentation is a multi-billion dollar industry for participating manufacturers and doctors. For some women, it’s a potential, scientifically proven nightmare.

If you’re considering breast augmentation surgery, take note of the following statement from the FDA: “Breast implants are not lifetime devices; the longer you have your implants, the more likely it will be for you to have them removed.”

Ultimately, the choice is yours. Do your homework and educate yourself on the potential risks before deciding on breast implants.

If you’re experiencing any of the above symptoms or have been diagnosed with an autoimmune disease or you have been sick with no known cause (and, you have breast implants), having your implants removed may provide the relief you’ve been seeking. Explant surgery to remove breast implants, the capsule and surrounding areas can be lifesaving for some women, although the procedure is no walk in the park. It is complex and must be performed by a highly skilled and experienced surgeon.

If you are experiencing complications or unresolved health challenges since breast implantation or believe you’re suffering from breast implant illness or have undergone explant surgery, I can help you!

If you know someone with breast implants that is suffering and they’ve been diagnosed with any autoimmune disease such as lupus, Hashimoto’s, rheumatoid arthritis, Sjögren’s syndrome or have had autoimmune-like symptoms after augmentation, have them contact my office.

A holistic and integrative approach works best, as silicone and saline breast implant illness is truly a holistic illness, with the necessity of the practitioner understanding integrative and functional medicine, holistic health, bio-individual clinical nutrition, safe and effective detox protocols, and the building process of a strong immune system and strong healthy foundation. Schedule a free 15-minute consultation.