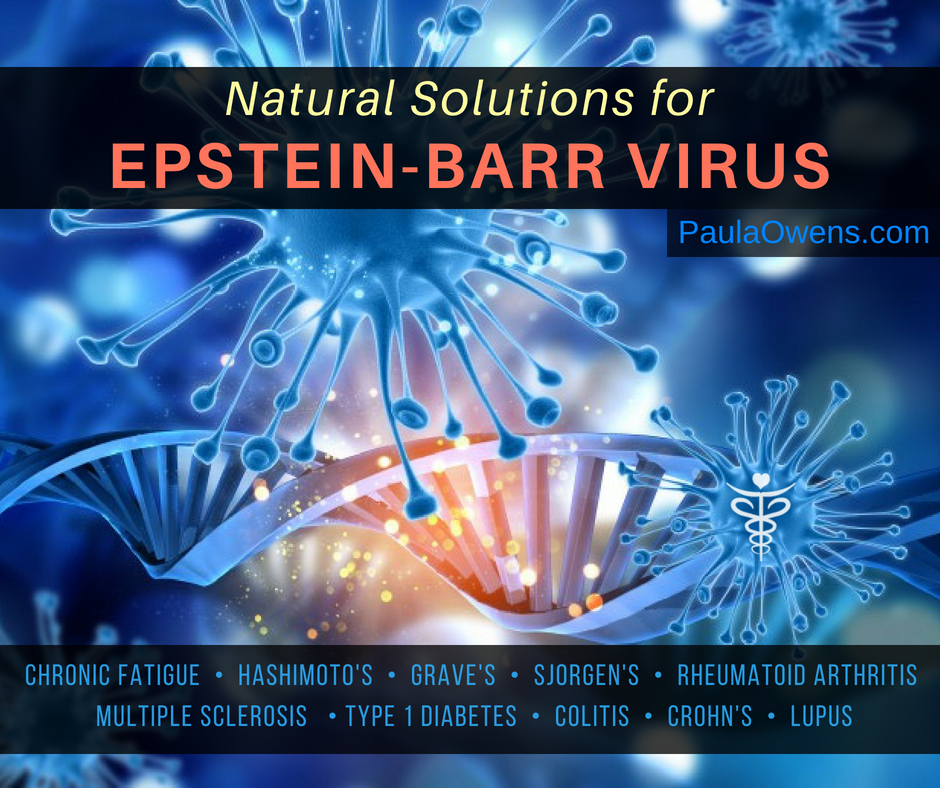 Epstein Barr Virus (EBV) is one of the most common viruses. It’s a member of the herpes group of viruses including HSV 1 and 2, Varicella zoster virus (shingles, chicken pox), Cytomegalovirus (CMV) and Pseudorabies virus. A common factor of these viruses is their stress on the immune system, and their ability to remain dormant in the body for life even after the initial infection.

Infection with Epstein Barr is inevitable in humans. Estimates are that 95% or more of the population carry antibodies to Epstein Barr virus. Those infected with EBV during adolescence or young adulthood may develop infectious mononucleosis (mono). Although symptoms of mono usually clear up after a couple months, EBV will remain dormant in the body for the rest of a person’s life.

Epstein Barr virus is normally spread through saliva and other bodily fluids. During pregnancy, the virus can be transmitted to the unborn baby. It can be spread unknowingly by daycare workers, teachers, grandmas, and college students.

Epstein Barr is a key player in autoimmune disease and chronic illness. It is a contagious, highly infectious, opportunistic disease allowed by a weak immune system; it can be contracted from an infected carrier, overuse and abuse of drugs and/or alcohol.

Periodic reactivation of Epstein Barr may occur, but usually doesn’t cause symptoms or illness in healthy individuals with strong immune function. But, if you’re experiencing a vast amount of stress, or you’re pregnant, or have a weakened immune system, EBV and other viruses such as cytomegalovirus (CMV) can become problematic. CMV is spread by direct contact of body fluids, such as saliva, blood, urine, semen, vaginal fluids, and breast milk. CMV is the most common virus transmitted from a pregnant woman to her unborn child.

Most people have been exposed to Epstein Barr by age 40. Many people don’t realize they have been infected because they never feel sick.

People with autoimmune conditions have an elevated microbial load, disrupted microbiome, mitochondrial dysfunction from toxin exposures, and nutritional deficiencies. As the pieces to the autoimmune puzzle are identified, the root causes can be addressed systematically by peeling away the layers of the onion, and building a strong foundation through diet, nutrition, toxic exposure elimination, lifestyle and environment interventions.

A viral protein found in EBV-infected human cells may activate genes associated with an increased risk for autoimmunity. [Nature Genetics] The Epstein Barr Virus attacks the beta cells of the pancreas leading to type 1 diabetes and other autoimmune conditions.

A longitudinal study determined that the strongest known risk factor for multiple sclerosis is infection with EBV. Compared with healthy controls, the hazard of developing MS is approximately 15 times higher among individuals infected with EBV in childhood, and about 30 times higher among those infected with EBV in adolescence or later in life. [Expert Rev Neurother, 2013; 13(12 Suppl): 3-9]

Dr. Alex Vasquez, a researcher, and a doctor of naturopathic medicine, chiropractic and osteopathy classifies five categories of viruses:

Epigenomic viruses are often common viruses like herpes, Epstein Barr, cytomegalovirus (CMV), human papilloma virus (HPV), etc. Most of the population contain these viruses although the immune system keeps them inactive unless a major stressor occurs and they become active. This group exists outside of our DNA.

Endogenous viruses are sometimes called human endogenous retroviruses that are embedded in our DNA. Science tells us we may not have the full virus, but there are fragments of the virus such as the capsule that can cause inflammation.

Bacterial immune-suppression is based on the fact that some bacteria and fungi have immunosuppression functions, and as the immune system is suppressed previously protected or silent viruses become active. The combination of these viruses and bacteria create a type of poly-dysbiosis. Viruses add to the total microbial load that will create a total inflammatory load.

Immune suppression and the link to Epstein Barr Virus

Nutrients to build immunity and slow the replication of viruses

The goal is to build up cellular reserves long before the total microbial load reaches the threshold where inflammation overwhelms the entire system and a latent viral infection is reactivated and autoimmunity expresses itself.

NAC is one of the most cost effective ways to boost systemic glutathione levels. It is a potent antioxidant and immune booster with the ability to fight colds, the flu and a host of viral infections. NAC has powerful anti-viral replication properties. Those with active acute systemic viral infections require higher doses of NAC.

For those with chronic reactivated Epstein-Barr Virus, the power to regain control of your health and feel better is in your hands. By making healthier choices and awareness of the immune suppressors and the profound impact that lifestyle medicine has on your overall health, you will strengthen your immune system so you can live in harmony with microbes like EBV.

Corticosteroids, prescription antiviral drugs such as acyclovir, and antihistamines are ineffective and have not shown clinical benefit compared to placebo for the routine treatment of mono.

This “High Energy Soup” is often helpful in restoring adrenal function, especially during active/chronic viral infections. It is high in minerals, calming and alkalizing to your system.

Combine ingredients and simmer on low heat for one hour or until veggies are tender.