Every single day we’re exposed to chemicals and toxins through the food we eat, the air we breathe, drugs and medications we may be taking, and the water we drink and bathe in. Over time, these toxic chemicals accumulate in our bodies.

Heavy metal pollutants such as aluminum, lead, mercury, arsenic and cadmium can alter and damage cellular function, mitochondria, and impair mental and physical health in adults and children. Heavy metals become toxic when they’re not metabolized and end up accumulating in the soft tissue.

Not all metals are toxic though. Certain trace metals are required for optimal health and body balance, such as iron, zinc, copper, chromium, nickel, lithium, manganese and molybdenum, but if there is an excess of any of these they become oxidative and toxic to the body.

Many research studies in the U.S. and Europe have linked heavy metal toxicity such as lead, mercury and aluminum with a wide range of illnesses and health conditions that cause serious damage to the lungs, brain, heart, liver, kidney, bones, GI tract and reproductive systems. Metals can directly and indirectly damage our DNA and contribute to several diseases and illnesses. 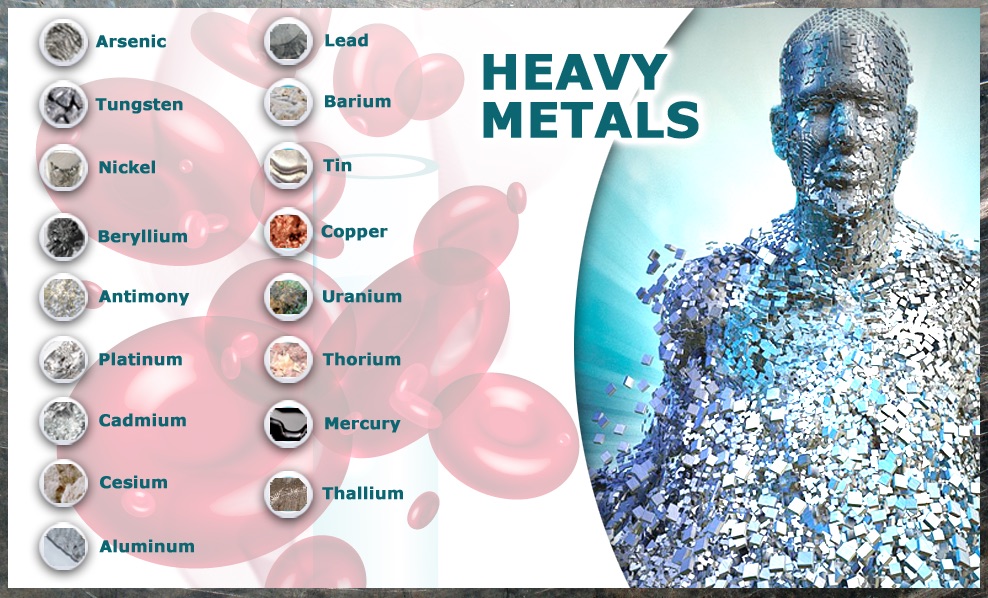 “One of the most common causes of psychiatric problems (of which medical doctors are unaware) is heavy metal toxicity.” —Dr. Simon Yu, M.D. author of Accidental Cure

Heavy metal toxicity is connected with all sorts of health problems and diseases that many people think are related to just getting older. These are also diseases many doctors suggest managing with drugs. Medical schools have failed to educate doctors and dentists of the dangers of heavy metal toxicity. If you ask your doctor to test and rule out heavy metals because you feel a sense of deep heaviness, are tired, depressed or experience achy, sore or chronic joint pain for no reason, all too often the request is dismissed and instead you’ll probably get a prescription for an antidepressant.

Heavy metals build up in the body over time and present no discernible symptoms in the early stages. Toxic metal body burdens are neurotoxic meaning that these metals trigger an inflammatory response, mitochondrial dysfunction and oxidative stress causing adverse symptoms that affect the psycho-neuro-immune and endocrine systems.

The top 4 heavy metals that are most harmful to our health include arsenic, lead, aluminum and mercury, which was confirmed by The Agency for Toxic Substances and Disease Registry (ATSDR) when they compiled a list of the “Top 20 Hazardous Substances.”

According to a Brown University study, researchers found that nearly 23% of American women of childbearing age met or exceeded levels for all three environmental chemical pollutants (lead, mercury, and PCBs), and 56% of the women exceeded the median for two or more of the three pollutants. All but 17.3% of the women aged 16 to 49 were at or above the level for one or more of these toxic chemicals that are passed to fetuses through the placenta and to babies through breast milk.

The normal aging process is one of the most prominent risk factor associated with increased odds of having higher levels of lead, mercury and PCBs. As we grow older, the risk of exceeding the level in two or more of these pollutants increases. Individuals age 30-39 have 12x risk, and those 40-49 have 30x the risk because these chemicals accumulate in the body over time as well as individuals that were born in the 1950s and 1960s since this was before most environmental protection laws were enacted.

Even LOW amounts of heavy metals can be harmful. —Ellen Silbergeld, Ph.D., a professor at John Hopkins University

Our cell, tissue and organ function are impaired anywhere toxic metals are deposited. In addition to causing direct damage, the toxic metals also cause damage by displacing nutritional minerals in key positions in cellular function, which results in slowing down or stopping these functions altogether. –Jonathan Wright, M.D.,

It’s not possible to completely avoid exposure to toxic metals (Singh 2011), but one can minimize exposure by eating organic foods, filtered water, and healthier lifestyle choices. Even those who are not occupationally-exposed carry certain metals in their body as a result of exposure from other sources, such as food, beverages, air and the environment. It’s possible to reduce metal toxicity risk through dietary, environmental and lifestyle choices that diminish the probability of harmful heavy metal uptake and promote the safe metabolism or excretion of ingested heavy metals.

In part Part 2 of this article, I cover dietary, nutrition, supplements, environmental strategies and preventative lifestyle measures to reduce the risk of heavy metal toxicity, and safe and effective methods to detox heavy metals.

There are various methods of testing to detect heavy metal toxicity include:

In 2005, my test results indicated extremely high levels of lead. In part 2 of this article, I share the tips that I personally followed (and continue to follow) to detox, safely chelate and reduce the high levels of lead from my accumulating in my body.