The Dangers of Acetaminophen (Tylenol) 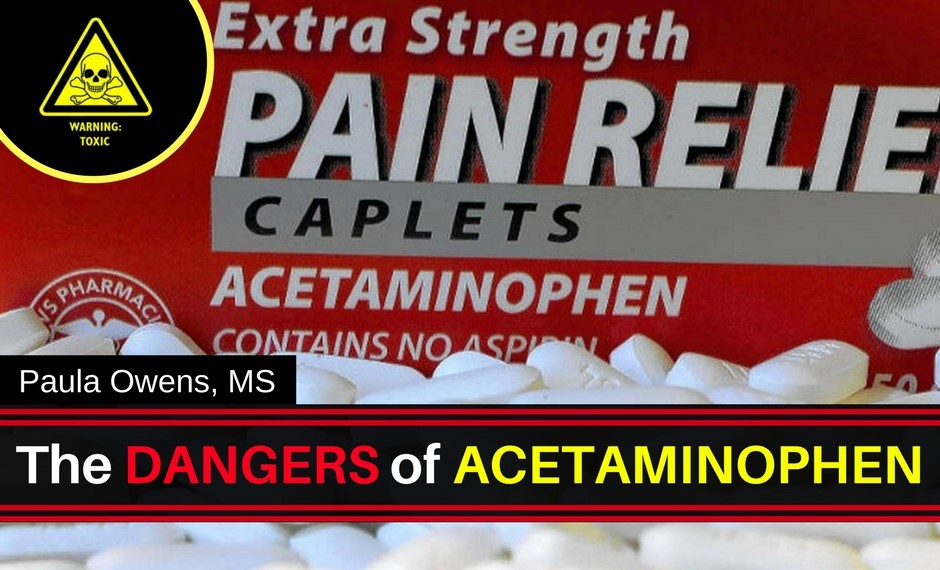 The active ingredient in Tylenol, acetaminophen is found in more than 600 drugs including many OTC medications targeted at children.

The Dangers of Acetaminophen

Acetaminophen overdose is one of the most common poisonings worldwide. 86% of emergency room visits for medicine poisoning involve a child who got into a medicine belonging to an adult. According to the American Journal of Medicine, approximately 107,000 individuals are hospitalized every year for NSAID-related GI complications, and at least 16,500 deaths occur.

Ibuprofen is one of the leading causes of emergency room visits if not number one. Why? All non-steroidal anti-inflammatory drugs (NSAIDs) like Ibuprofen cause internal stomach bleeding.
From a research paper: “NSAIDs can cause damage to the gastroduodenal mucosa via several mechanisms, including the topical irritant effect of these drugs on the epithelium, impairment of the barrier properties of the mucosa, suppression of gastric prostaglandin synthesis, reduction of gastric mucosal blood flow and interference with the repair of superficial injury.”

Never take Tylenol after drinking alcohol. It’s a deadly combo for your liver and your kidneys.

“Acetaminophen temporarily inhibits our body’s ability to process toxins, depleting glutathione levels resulting essentially in a toxic wash of the body, including the brain.” —William Parker, Ph.D., an expert on immunology and an associate professor at Duke University Medical Center

Sleep. When taken prior to sleep, NSAIDs, ibuprofen and aspirin disrupt sleep by increasing the number of awakenings and time spent awake, delayed the onset of deep sleep, and decreased sleep efficiency. [Physiology & Behavior. June 1994.]

Acetaminophen and Heart Health. A study in the journal Lancet found that people who take high daily doses of NSAIDs increase their cardiovascular risk by 33%!

A study in the European Heart Journal—Cardiovascular Pharmacotherapy reported that Ibuprofen use increases risk of cardiac arrest by a whopping 31%!

Another study in the journal Circulation found that for people who had one heart attack, taking NSAIDs increased their risk of death by nearly 60% and risk of a second heart attack by 30%!

Acetaminophen and Pregnancy. Fetal exposure to acetaminophen (Tylenol) increases risk of neuro-developmental problems and endocrine disruption. Acetaminophen use is linked to emotional and behavior problems, ADHD and autism if used during pregnancy.

Never give acetaminophen-containing medications to your child or take it while pregnant or breastfeeding.

Never allow medical personnel administer acetaminophen (Tylenol) to your child either. It’s the ‘go-to drug’ for many things from circumcision to vaccination in many clinics and hospitals around the world.

Acetaminophen and Arthritis. A study in the journal Lancet reported that Paracetamol (Tylenol) is ‘not clinically effective’ in treating osteoarthritis pain or improving physical function.

If you take just one NSAID such as Motrin, Datril, Anacin or Ibuprofen every four days over your lifetime, there is nine times the normal risk for vital organ damage. –New England Journal of Medicine, 1994

Side Effects of Aspirin

Americans consume 15 tons of aspirin a day – that’s 19 billion tablets per year! Although thought to be harmless, a single aspirin will be responsible for 1500-2000 deaths!

“The side effects of aspirin use for heart disease are far greater than the benefits, especially for women.” –Dr. Jack Wolfson, Paleo Cardiologist

If you take NSAIDs for any reason, it’s crucial to protect your stomach and intestinal lining. If you don’t, you’re going to struggle from stomach discomfort, ulcers, poor absorption of nutrients, and infiltration of bad bacteria such as H pylori.

If you must take Ibuprofen for a few days because you’re in pain, protect and prevent your gut from getting destroyed with evidence-based nutritional support like glutamine powder and GI Resolve. GI Resolve has added glutamine for gut healing, but some people don’t do well with glutamine. They become irritable, anxious or insomniac. Take small amounts over a period of time between or before meals. Don’t take within 5 hours of sleep.

When dealing with chronic pain and inflammation, it’s crucial to identify the root cause and utilize natural, drug-free therapies and healthy dose of lifestyle medicine.

— How to Heal Injuries Faster

— Healthier Alternatives for Pain and Inflammation