Magnesium deficiency is one of the most common nutrient deficiencies with estimates of 80-90% of the population deficient in magnesium! This magical mineral is involved in over 300 biochemical functions in the body such as glucose metabolism, healthy heart and neuromuscular activity, calcium and vitamin D metabolism, neurotransmitter function plus more.

Do you have a Magnesium Deficiency?

— Food levels of magnesium have declined drastically over the years due to mineral-depleted soils. Many fruits and vegetables have lost large amounts of minerals and nutrients in the past 100 years with estimates that vegetables have dropped magnesium levels by 80–90% . [Nutrients. 2018 Sep; 10(9): 1202.]

The mineral content of calcium, magnesium and iron in cabbage, lettuce, tomatoes and spinach has dropped 80–90% between 1914 and 2018.

Processing techniques, such as grain bleaching and vegetable cooking can cause a loss of up to 80% of magnesium content. The Standard American Diet is lacking magnesium, and the very items that most people eat (wheat, sugar, ultra-processed carbs, soda, caffeine, alcohol, factory-farmed meat and dairy products, GMOs, pesticides, glyphosate, chemical-laden processed foods) deplete and chelate magnesium from the body.

— Beverages, such as soda and soft drinks, which contain high phosphoric acid along with a low protein diet (<30 mg/day), and foods containing phytates, polyphenols and oxalic acid all contribute to magnesium deficiency.

For every molecule of sugar consumed, it takes 54 molecules of magnesium for your body to process it!

— If you sweat excessively, drink unfiltered fluoridated water, use fluoridated toothpaste, take pharmaceutical drugs, use OTC meds, experience anxiety or depression, suffer from constipation, asthma, love sugar, drink too much alcohol, your lifestyle is highly stressful, your blood pressure is high, and your adrenals are depleted, there’s no question that you’re deficient in magnesium.

When we think of stress, we often think of physical or emotional stress, but inflammatory foods, lack of sleep, chemical exposure, over-exercising, even loud noises activate the stress-response causing magnesium levels to decline. Magnesium deficiency is directly associated with an increased risk of metabolic syndrome, type 2 diabetes and cardiovascular disease.

Magnesium supplementation is effective in reducing symptoms of mild to moderate depression in adults with beneficial effects occurring within 2 weeks of treatment. [PLoS ONE 2017]

— Magnesium requires healthy hydrochloric acid (stomach acid) production, and healthy functioning digestion for proper absorption of magnesium from the diet. Irritable bowel syndrome, leaky gut, Candida overgrowth and other gut disorders can severely limit the amount of magnesium that the body will be able to absorb. Malabsorption of magnesium can lead to anxiety, ADHD, panic attacks, hypertension, fungal and bacterial infections, PMS, and many other physical and mental ailments. If you’re deficient in magnesium, other minerals are likely to be low as well.

— Many people often think they’re deficient in calcium, when in reality it’s magnesium they’re deficient in. Magnesium is a synergist for calcium and vitamin D absorption. No matter how much vitamin D you take, your body cannot properly use it if you’re deficient in magnesium. Taking large doses of vitamin D can induce severe depletion of magnesium. And, without adequate magnesium extra calcium collects in the soft tissues instead of bone causing calcium deposits in the arteries, organs and brain increasing risk of arthritis, heart attacks, and Alzheimer’s disease. Magnesium is critical for heart health, as excessive amounts of calcium without the counterbalance of magnesium can lead to a heart attack and sudden death.

Magnesium deficiency is responsible for many chronic health problems and diseases including low bone density, osteoporosis and metabolic disorders that can increase the risk of developing cardiovascular disease and diabetes. In two separate studies published in the American Journal of Clinical Nutrition, magnesium deficiency was found to be associated with abnormal bone calcification. Both studies reported that the higher the intake of magnesium, the higher the level of bone mineral density.

Circulating and dietary magnesium are inversely associated with cardiovascular risk. Insufficient levels of magnesium increase inflammation and exacerbate age-related diseases such as cardiovascular disease, cognitive dysfunction, diabetes, Alzheimer’s, and hypertension. Low levels of magnesium can contribute to toxic heavy metal accumulation in the brain that may be responsible for Alzheimer’s, Parkinson’s and MS. Depression and anxiety are also linked to a magnesium deficiency.

Magnesium can act at the blood brain barrier to prevent the entrance of stress hormones making magnesium a necessary component for the release and uptake of serotonin by the brain cells.

Several studies over the years have consistently shown that chronic magnesium deficiency is associated with many adverse symptoms and major health disorders.

The Health Benefits of Magnesium 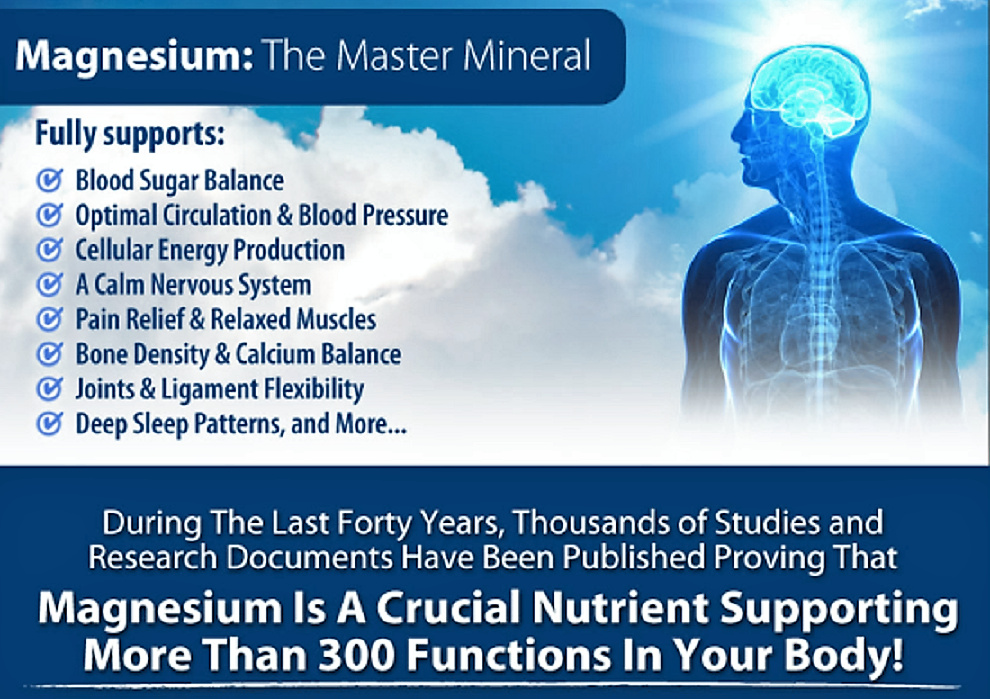 Although the RDA recommends 300-400mg/day, most individuals benefit from 400-1000mg/daily or up to bowel tolerance. Excess magnesium is excreted in the urine and stool. A side effect of too much magnesium is loose stools, which can be alleviated by supplementing with magnesium glycinate.

Supplementing with magnesium is best taken between meals or before bedtime on an empty stomach when little or no fat is present in the gut (fat binds to magnesium and prevents absorption).

*** Individuals with kidney disease or heart disease should consult with their practitioner prior to supplementing with magnesium.

Soaking in an Epsom salt bath with 3-4 cups of Epsom salts (magnesium sulfate). The magnesium is absorbed through the skin and is helpful for soothing sore muscles after an intense workout or an injury, and inducing muscular relaxation before bedtime.

Alternatively, magnesium chloride, a topical transdermal form of magnesium oil or gel is easily assimilated and metabolized by the body. Apply behind the knees, on the feet or the inner arms before bedtime or apply directly to inflamed, injured areas.